Halloween Q & A time! I was tagged by K.A. Dowling and HollieMarie213 for this post.

1. Are you a scaredy cat or a horror aficionado?

Scaredy cat! I don’t want dark stuff in my head. This is the result of a less than pleasant dream I had after I binge watched Law and Order SVU several years ago.

2. Would you ever consider writing a horror novel?

Nah. I’d have to read more within the genre to even know how they work first, which I’m not really interested in doing.

3. What is your favorite bookish costume you’ve ever worn?

In first or second grade I was Belle for a book fair!! Blue dress and apron Belle, not yellow ballgown Belle. I carried around a book, my mom twisted my hair back. It was PERFECT! 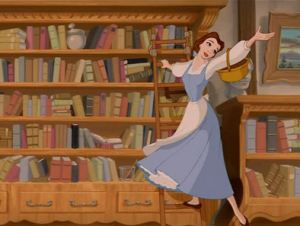 4. What is the best bookish costume you’ve seen someone else wear?

I don’t know. All the Harry Potter themed costumes are nice.

5. What literary villain is your favorite?

Lady de Winter in The Three Musketeers. I love round villains. Villains who have actual motivation as well as good and bad qualities.

6. Will you be visiting a haunted house this year?

7. Would you rather go to a Halloween party or go Trick-or-Treating?

Party. But we’ll be trick-or-treating this year.

There are too many. But I have to mention This Is Halloween from Nightmare Before Christmas and Werewolf Bar Mitzvah from 30 Rock.

9. What scares you the most about the writing process?

Being mostly done with a manuscript and realizing you need to make a major change. It stops all progress because why keep writing when it’ll all need to be reworked anyway?

10. Monster Mash – If you had to say your antagonist was a mix of two traditional monsters what would those be?

Depends on the WIP. My most recent story has an actual monster for a bad guy (But I had to halt progress on it, see my answer to #9). My current WIP however, doesn’t have a physical antagonist at all.

11. Would your MC be more scared of being left alone in a dark forest or an abandoned castle?

Castle. She feels pretty at home in the woods.

12. Does anyone in your WIP believe in ghosts?

Not really. More like they want to believe the dead they’ve lost are still around in the form of guardian angels or something.

13. What character would last the longest in a scary movie?

My MC. She’s an emotional wreck, but she’s ingenious and a survivor.

14. Good witch or bad witch – do you enjoy torturing the characters in your WIP or do you feel bad about it?

In general, I’m somewhat neutral. I know the bad needs to happen, and I’m not afraid to torture. I don’t necessarily take pleasure in it, but I also won’t shy away from it. I’ve written some pretty horrifying, sickening, and heart rending stuff lol.

15. Pick a love interest from your WIP: would they be most likely to scream like a little kid or punch someone in the face if they were scared abruptly?

The boys would punch. The girl might scream. My MC would do neither. She’d flinch (and be internally freaking out) but wouldn’t react further until she knew exactly what was going on.